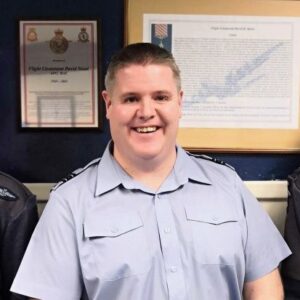 A former cadet of 2168 (Yeadon) Squadron, Squadron Leader Wayne Yeadon joined the ATC in 1990, giving the organisation 9 successful years cadet service, attaining the rank of Cadet Warrant Officer and also being awarded an Air Officer Commanding’s Commendation for Highly Meritorious Conduct before aging out in September 1999.

After a short time away he re-joined the unit as a Civilian Instructor and was quickly moved into uniform as a Warrant Officer (ATC), taking up the post of Squadron Warrant Officer.
A qualified Range Conducting Officer and Weapons Instructor, he also became a qualified Drill Instructor. This led to him being appointed as a Sector Warrant Officer for No.6 Sector, South & West Yorkshire Wing alongside his squadron duties and in June 2009 he was awarded with an Air Officer Commanding No.22 (Training) Group RAF’s Commendation.

In 2011, after completing a Licentiateship in Youth Training and Management and qualifying for his Cadet Forces Medal, Warrant Officer Yeadon was invited “down the valley” and was welcomed into the staff team at 1224 (Wharfedale) Squadron. There he continued to assist and provide training in his areas of expertise to the members of the unit and surrounding areas but after a few years there and having spent 13 years as a Warrant Officer he decided to look at other options.

At the start of 2015, his application for Commissioned service was accepted and, having quickly completed both his Officers Initial Course and Squadron Commanders Course at RAFC Cranwell, was appointed to be Squadron Commander, 1224 (Wharfedale) Squadron in the rank of Flight Lieutenant RAF VR(T) in July 2015.
In 2017 he became a RAFAC Safeguarding Officer and in 2019 he became a member of supernumerary staff at 645 Volunteer Gliding Squadron (VGS), based at RAF Topcliffe, where he teaches cadets the Aviation Ground School course.

March 2020 saw Flt Lt Yeadon receive a promotion having applied for, and accepted, the post of Personnel and Support Officer for Central & East Yorkshire Wing. This post saw him joining the Wing Executive Team in the rank of Squadron Leader.

Personally, Wayne works as a Cover Supervisor at a local secondary school and through his passion for Rugby League also works as a Match Day Co-Ordinator for the Bradford Bulls RLFC. He is a BG Trampoline Coach, a musician playing guitar and singing and enjoys spending time with family and friends.