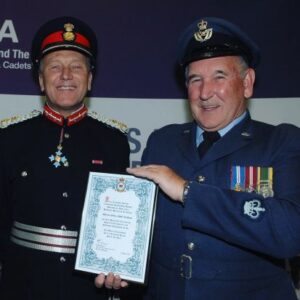 Born 1948 and raised on a farm at Draughton. He attended Skipton Parish Church School and later Keighley Secondary Technical School. On leaving school he worked on the home farm where he stayed until 1971 when he became a farm milk collection driver with the Milk Marketing Board eventually leaving to set up a general maintenance business.

Always having had a strong interest in all aspects of transport, he joined the Yorkshire Dales Railway Museum Trust becoming its board secretary after a few years. Work and family commitments meant he could no longer keep this up and David took a lesser role and still keeps contacts to date.

In 1988, after his children joined 1224 and being fed up with the double trip each parade night, a year later he offered his services, albeit with some reticence from his wife Jan. He was rapidly appointed as a Civilian Instructor.

Early in 1992 he was appointed Warrant Officer and worked hard with the then OC Flt Lt John Hitchen to raise the Squadron strength from 15 to a healthy 45 in a few months and a level which has generally been steady since, though we did get to 60 briefly.

A stalwart member of Squadron Staff, WO Wood is still in post as the Squadron’s Warrant Officer after 28 years having gathered a few awards along the way. A Lord Lieutenant’s Certificate in April 2013, an AOC 22 Group Commendation in the Queen’s Birthday Honours list in June 2016 and a Presidential Certificate from the Royal Air Forces Association in the Honours list for 2019 for Services to RAFA.