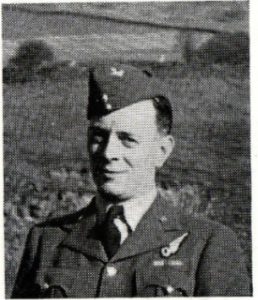 A textile merchant and manufacturer who had served as an observer in the Royal Flying Corps and Royal Air Force in the First World War was the first Commanding Officer (commissioned on 19th March 1941) and was instrumental in the foundation of the Squadron. He was also a member of the Royal Observer Corps. He would later be promoted to Squadron Leader. He was awarded an MBE in 1948 (whilst Hon. Secretary of the Yorkshire Air Training Corps Association) and eventually was appointed the High Sheriff of Yorkshire in 1958. He was a former President of Ilkley Rugby Club.